This article was originally published in the Winter 2022 edition of The Australian TAFE Teacher. 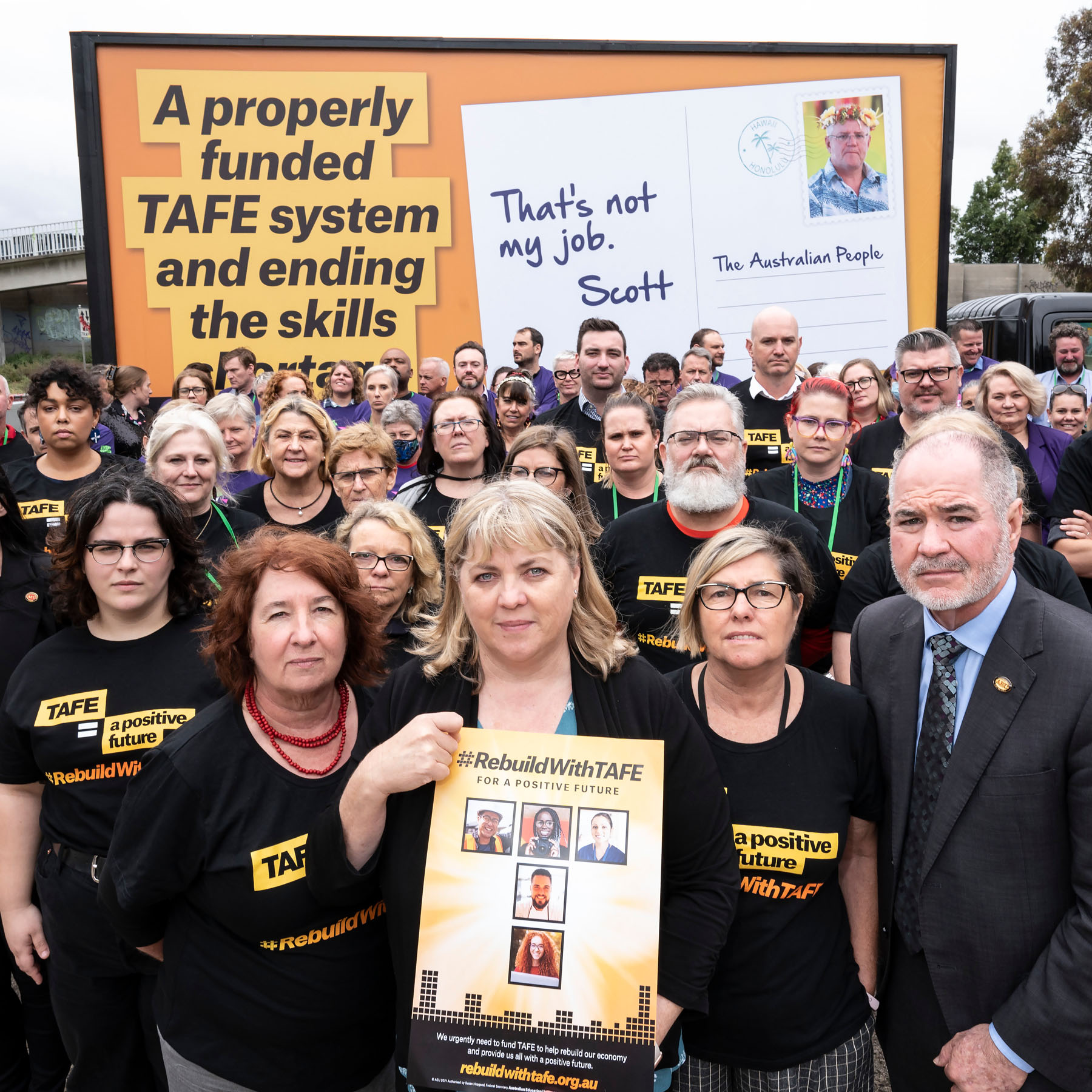 The Australian TAFE system faced potential annihilation during the three terms of the Liberal-National Coalition government. Only the steadfast support of the community and action by AEU members in TAFE held them off.

Although the outcome of the recent federal election is being dissected and scrutinised, the importance of TAFE and vocational education as an election issue has gone largely unacknowledged. We want to change that.

Launched in the first part of 2021 in the depths of the COVID pandemic, the AEU’s Rebuild with TAFE campaign began in the most challenging of circumstances. Building on the decade-long campaigns for full and fair funding for all public education, preschools, schools and TAFE, the new campaign captured a spirit of positivity about the capacity of TAFE to make a transformative contribution to the lives and wellbeing of Australians, our community and our economy.

The political landscape prior to the 2022 election was bleak. A three-term conservative government had wrought great harm on many institutions across our community and TAFE was a key target. During its time in government, the Liberal-National Coalition used the privatisation of the provision of vocational education – through policies begun under a Labor government a decade ago – to set about systematically shifting funding from TAFE to for-profit, private providers and placing crippling debt on TAFE students.

All across Australia people know that TAFE provides high quality vocational education and has changed the lives of millions. Polling prior to the federal election showed that 94 per cent of Australians want more funding to be provided to TAFE.

With hundreds of campuses all around the country, TAFE can help Australia rebuild in response to the COVID crisis. The immediate future requires the education and deployment of 200,000 skilled workers, particularly in the care sector, without which the Australian economy will struggle and vulnerable members of our community will miss out. TAFE is perfectly positioned to provide skills, jobs, purpose and opportunities to millions more Australians, and help to create a positive future for all of us. The missing ingredient is funding.

The Rebuild with TAFE campaign set four clear goals to restore TAFE to its position as the premier provider of vocation education in Australia:

Additionally, the AEU will be lobbying the government to address the casualisation of the workforce, stagnant wages, tenuous employment, excessive hours, stability of programs and prioritising government-funded programs to be delivered by TAFE.

The impact of the COVID pandemic was projected to have a strong negative impact on the capacity of the community to mobilise in support of campaigns during the election.

While this expectation was borne out in some sections of the community and in some electorates, in many seats the election campaign was characterised by intense campaigning around social issues generated by the community: climate change, integrity in politics and equality for women.

The Rebuild with TAFE campaign tapped into a strong sense of “it’s time” in the public education community. The call to action during the election was met by unprecedented commitments by AEU members and community members who stood up to be counted when it mattered for TAFE.

There were many more volunteers to “Do Your Block” than at the last election, progressive politicians clambered to visit TAFE and be seen to be supporting a pivotal community institution and the major policy announcements on public education by Labor were about TAFE.

The work of everyone involved in the campaign to Rebuild with TAFE has delivered cause for optimism.

The election of a majority Labor government with the capacity to pass legislation in the Senate with the support of the Australian Greens and one other senator provides a clear mandate for, and mechanisms for the delivery of, the policy commitments announced during the election.

The policy principles of the past government can be changed. The active encouragement of students to abandon quality vocational education at TAFE in favour of sub-standard private, for-profit providers can be reversed. The restoration of TAFE infrastructure can begin. A guarantee of funding for public TAFE equal to 70 per cent of all vocational education funding will enable TAFE to rebuild itself as it rebuilds our community.

There is still much to be done and the AEU’s Rebuild with TAFE campaign continues, emboldened with hope for a better future.