This article was originally published in the Autumn 2022 edition of The Australian TAFE Teacher. 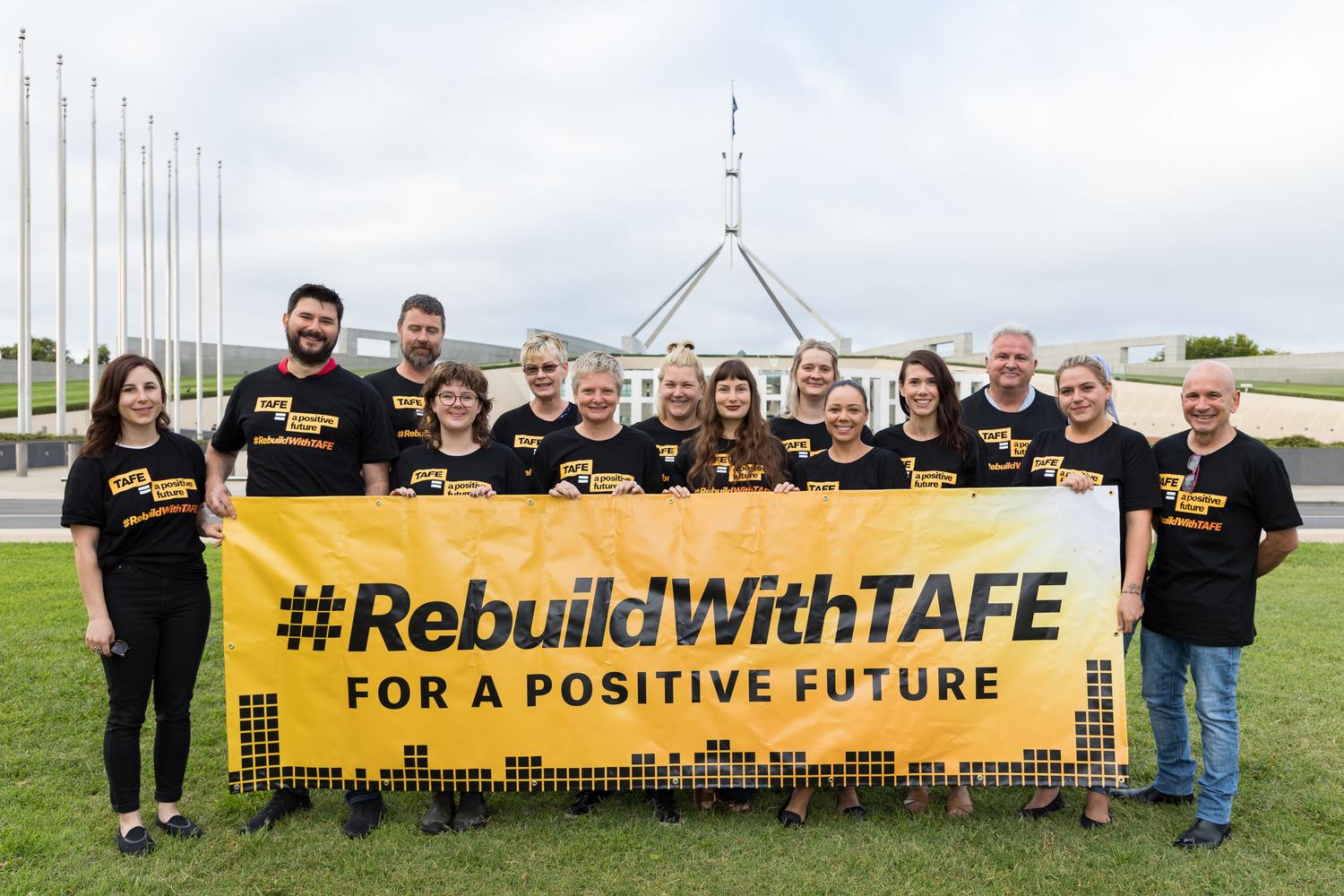 Watching the Prime Minister, Scott Morrison, playing hairdresser in a marginal electorate recently was just revolting on so many levels. In another of his staged, awkward photo-opportunities he talked up the number of young people starting apprenticeships and getting work.

But the reality is that hairdressing is just one of the 153 professions on the skills priority list that is experiencing a critical shortage of apprentices according to the National Skills Commission.

Far from addressing the skills crisis, which began before the pandemic and has only been exacerbated since, the Morrison Government has also overseen youth unemployment grow to twice the rate of the national unemployment rate – and that’s before you take into account all underemployed and casual workers.

AEU analysis of federal government’s Labour Market Information Portal shows there will be a shortage of more than 207,600 workers in the next five years across critical industries including childcare, aged and disability care, hospitality, carpentry, plumbing, and ICT.

Investing in a strong TAFE sector would ensure a sustainable supply of skilled and capable Australians ready to fill workforce shortages. Instead, the federal government refuses to properly fund the public provider of vocational education, with the 2021 budget again silent on TAFE despite National Cabinet determining skills to be one of the six key priorities for the government during the pandemic.

It’s exactly why the AEU launched the Rebuild with TAFE campaign, because we have had enough of governments and politicians putting TAFE last and letting a critical part of Australia’s economy and education sector waste away.

A shocking result of the federal government’s lack of investment in TAFE is of course the impact on the aged care sector. While individual aged care facilities are legally responsible for the safety of their residents, the federal government has responsibility for this sector as a whole – and that includes making sure there are properly qualified and trained staff.

Aged care is in “complete disarray”, and it has been made worse by the surge in cases with Omicron, says Australian Nursing and Midwifery Federation (ANMF) assistant federal secretary Lori-Anne Sharp in an interview with the Australian Educator magazine.

It has got so bad that the Prime Minister has had to consider calling in the Australian Defence Force to support the sector.

The Morrison government should have had a plan, Sharp says.

“They were warned. We had a royal commission that found chronic understaffing in the sector. They’ve done nothing in two years to address any of that,” she says.

“Staffing levels are so low that just three staff are often left to manage as many as 120 aged care residents at night.”

One of the royal commission’s most crucial recommendations, she says, was for a mandated safe minimum level of staffing in aged care, but the Morrison government has failed to act.

“These are our elderly citizens who deserve so much more dignity and respect. And the workers who are looking after them are the good humans in the world, they’re the ones who care. They are doing it for low pay, and this government’s just not showing them any respect.

It is clear there needs to be an effective national strategy for workforce renewal, yet the federal government prefers to react to problems rather than get out in front of them.

The Prime Minister lacks vision, an ability to plan for the future and fails to see that the answer to this crisis is right in front of them.

“Those educators would liaise with industry to help predict skill shortages up to 10 years ahead. We need to return to a proactive VET system and a proactive public education system to rebuild our economy and reskill people,” says Sharkey.

Over the past two years the AEU has used every opportunity to call on the government to launch a co-ordinated effort to put TAFE at the forefront of an urgently needed national plan.

The first step of the plan would be to restore the more than $3 billion of funding that has been cut from TAFE and training since 2013, including the nearly half a billion in cuts from 2018 and 2019.

Last year, the AEU commissioned research from the Centre for Future Work that proves TAFE is responsible for $92.5 billion per year in annual economic benefit to Australia, 16 times more than the annual cost to maintain the provider, but these long-standing and ongoing benefits will be permanently lost if governments fail to rebuild with TAFE.

Far from a proactive, well-funded public vocational education system, the Morrison Government has overseen extraordinary levels of casualisation and job losses in the TAFE sector.

The pandemic demonstrated the resilience and agility of TAFE teachers and education support staff. Despite working longer hours, many unpaid and overtime, teachers did their best to move swiftly and smoothly between on-site learning and online learning, ensuring students were able to continue their education.

But in return, the federal government’s trumpeted amendment to the Fair Work Act, which was supposed to require employers to grant ongoing employment to casuals, had no impact in the TAFE sector, with TAFE NSW in particular, refusing outright to convert any of its 7,700 casual staff.

Last year, the AEU gave evidence at the Select Committee on Job Security Senate Inquiry which has now recommended that the Fair Work Act amendment should be replaced, whilst revealing that it was more likely for a cleaner to achieve a permanent job than a TAFE teacher.

The AEU also welcomes the other recommendation in the Select Committee’s report to define “job insecurity” as a “workplace hazard” in occupational health and safety laws.

Safety at work is paramount and at the outset of the pandemic, the AEU wrote to the federal health minister, Greg Hunt calling for teachers and support staff across all education settings to be included in the COVID-19 vaccination priority groups.

We sought a commitment that the education workforce would have priority access to the protection of the vaccination in recognition of their status as essential workers providing an essential service and to prevent the likelihood of further education closures.

And, as far back as October, the AEU joined other unions in calling for free rapid antigen testing, but the Morrison Government prevaricated again.

As ACTU President Michele O’Neil said, “once again PM Morrison dodged federal government responsibility during the pandemic, leaving Australians to the lottery of lack of supply and differing state and territory approaches to rapid antigen testing.

“Right now, a single test can cost up to $20, if you’re lucky enough to find a chemist that still has them. That’s $100 for a family of five. That might be small change to the Prime Minister, but it’s
out of reach for many families.

“Unions and businesses have been calling on the Morrison Government to provide free rapid antigen testing since October, instead they’ve done nothing. Australia is lagging behind the developed world, including the USA’s chaotic healthcare system, in providing free and accessible testing.”

The AEU commissioned independent polling in 2020 that proved our message is already getting through to voters. The national survey revealed 94 per cent of Australians want to see more federal funding for TAFE.

And it seems the ALP is listening to TAFE members. AEU lobbying efforts resulted in firming up commitments from the ALP of 465,000 free TAFE places, $50 million for new facilities and equipment and a guarantee of 70 per cent of total government funding for TAFE.

If delivered, these commitments will rebuild and restore TAFE as the anchor institution of vocational education. They will ensure vocational students have access to more courses and more opportunity, to high quality new facilities and state of the art equipment, and importantly more teachers and greater individual attention.

The ALP commitment places TAFE at the centre of the federal election debate. It is a key point of difference between the parties meaning voters will have a clear choice when they head to the polls.

The Morrison Government’s privatisation-by-stealth agenda has seen students lose education opportunities through course cuts, campus closures and higher fees. Alternatively, Labor’s commitments will ensure TAFE teachers have the resources they need and that students have the skills they need to get a secure job. It recognises the concerns of TAFE teachers and recognises them as the experts in vocational education.

Most importantly, it means that Australia can rebuild with TAFE.